Home » Web Design Consultancy Blog » Hints and tips » How to convert images to greyscale in Inkscape 0.48

Earlier today, I was working on a project and needed to convert images in a design to greyscale in Inkscape (I’m using version 0.48 on Windows Vista. Update: this is still the case and works in Inkscape 0.48 on Windows 7), and a quick flick across the menus didn’t prove fruitful.

A deeper look yielded what I was looking for: it’s been renamed from previous versions (I think) to Desaturate, and can be found under the Filters > Colours > Desaturate option. 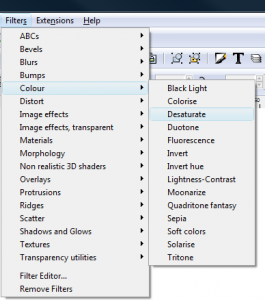 Note that the desaturate option in Inkscape also converts objects and paths to greyscale. You can get rid of the desaturation/greyscale effect by selecting the element(s) you want to change, and selecting Filters > Remove Filters (note: this will remove all filters applied, and not just the desaturation filter!).

Inkscape should have both Desaturate and Greyscale options according to Inkscape’s effect reference guide, but as you can see from the screenshot above, there is no greyscale option! You can, of course, create your own saved effect in Inkscape for greyscale if it bothers you that much.